The zoo up close to the predators

A zoological park, with a family dimension, presenting the largest collection of furry and feathered predators in the Auvergne Rhône-Alpes region.

The park allows you to travel around the world in a few hours and over a few hectares!

The zoo presents fascinating animals such as lions, white tigers, jaguars, wolves, cheetahs… and also little-known or sometimes threatened animals. This is an opportunity to learn more about the animal world in order to better protect it!

Each of us is an actor in the protection of nature, let’s act together for biodiversity!

It is with the past that the present builds the future…

It has been 50 years since a small, highly motivated team decided to set up in this small village of Fitilieu, in order to present felines to the public. With the limited means of the time, the intentions were nevertheless those of today: to make known, to understand andto preservethese often threatened animal species throughout the world.

It took time, courage and perseverance to build and shape this family-sized zoo, which features the world’s biggest cats.

More than 50 years later, the Domaine des Fauves is welcoming more and more visitors, and changing dimension… Its will is still the same: preserve and safeguard, thanks to knowledge !

These creations and innovations will be part of an even more participative and interactive approach, to better ensure our educational role, and finally to affirm what WE are: animal defenders!

The Domaine des Fauvesis a private establishment, and it is exclusively thanks to the public that it functions, and that innovative and original installations are set up each year.

All information will be posted on the website under the heading “The Park”, on our FB page (facebook access) and of course at the Park entrance.

A small zoo was created on the site of the Domaine des Fauves. It was then called“le Zoo des Abrets” and already had the ambition to present, in a general way, more than one hundred animals to the regional public. It is thanks to the will and tenacity of a handful of people that the site was created.

Less than 10 years after its creation,in 1976, the establishment experienced major financial difficulties, but it was bought byLucien Corporon. He gave the zoo a new lease of life by taking in bears and chimpanzees, and ran the zoo effectively with his wife for two decades.

The site was renamed “Parc Zoologique des Bruniaux” and extended to 22,000 m2. The animal collection consists of 32 species of mammals and 24 species of birds, with a majority of fawns and canids. But it is also worth noting the presence of chimpanzees, whose reproduction is then considered a speciality of the Corporon couple. Brown and collared bears are also displayed in two small pits near the entrance. Around 30,000 visitors are welcomed each year at this time.

Marc Muguet is finally hired as the manager of the establishment while Mr Corporon remains the owner of the premises. The collection gradually grew to approximately 250 animals displayed on three hectares.

Lucien Corporonwill sell his establishment to Marc Muguet. Together with his wife, he then developed a policy to bring animal captivity conditions up to standard. He soon moved the last four chimpanzees to other zoos and began work.

Marc Muguetinitially worked at the Amiens Zoo (France) where he was involved in snake breeding. He soon moved the last four chimpanzees to other zoos and began work. The director of the latter, Pierre Thivillon, sponsored him when he took over the Zoo des Abrets, which then became : Le Domaine des Fauves!

Marc, wishing to invest himself more particularly in the presentation of these animals, redevelops the park step by step… Carrying out consequent renovations: new installations are built, the site is planted, the paths and the enclosures are decorated with rocks… etc.

The Domaine des Fauvesthen contacted the coordinators of European breeding programmes and several other French parks, in order to welcome new species, and numerous projects were set up.

The renovation of the monkey house was the first major project, followed by the macaws which were given new aviaries.

The yearwas devoted to the construction of the marabou enclosure, the restructuring of the zoo entrance, the creation of an enclosure for raccoons, another for servals and some aviaries.
Since then, each year has seen the construction of new enclosures, new aviaries, the relocation of some species and the arrival of new animals.

We note the arrival of a pair of Capybaras and Caracals and the relocation of the Pumas and Canadian Wolves to two new enclosures. Marc Muguet also bought a piece of land adjoining the zoo at this time with a view to building new facilities.

Four European wolves were housed and displayed in one of the old bear pits, pending the construction of their new enclosure.

This was planned for an area of 1,000 m² on the land acquired in 2003 and was built throughout 2005, depending on the time and resources available.

The former Canadian wolf enclosure had been completely restructured a short time earlier. In 2005: a pair of wild dogs was also welcomed, and the arrival of meerkats, installed in a new enclosure next to the lion building, is to be noted.

The European wolves, who had arrived a year earlier, finally discovered their brand new enclosure. The new Siberian lynx enclosure was also completed in the summer. Spotted hyenas and a brown hyena, an uncommon species in captivity, were also welcomed to the park.

The yearwas marked by a new development with the arrival of four species of nocturnal raptors, including a pair of Leptogramma Owls.

In ten years, Marc Muguet and his team have really transformed this small provincial zoological park into a theme zoo!

The park has become very pleasant to visit, the paths are clean, planted and maintained.

Many new enclosures have been erected, most of them of a reasonable size and well designed, and very few old structures remain. The animal collection has also been superbly expanded with many species of small cats, canids, but also nocturnal and diurnal birds of prey, including several species of vultures. In recent years, a number of species in PEE and BSE have also been welcomed, including Jaguarondis (arrived in 2008), Sand and Viper Cats (arrived in 2010), Manuls, Otocyons and Striped Hyenas (all arrived in 2011).

Successful breeding of both small cats and raptors is now regular at Les Abrets.

The work continues with: the creation of new aviaries for small nocturnal raptors, the demolition of the twov old bear pits and the renovation of facilities for the public.

It is the creation of a snack bar, in order to better satisfy the visitors and the construction of an enclosure which will welcome a magnificent Nebula Panther.

New species have arrived in the park! Two jaguars, two wolves and 3 meerkats take up residence in their new enclosures.

A major change in the history of the zoo, as Le Domaine des Fauveswas bought byJacques-Olivier Travers (owner and director of the animal park Les Aigles du Léman
in Haute-Savoie).

During the year, the famous wolf Territory is inaugurated, a unique space where visitors have the privilege to enter the territory of this mythical predator! New and unknown species are welcomed: Geoffroy’s cat, Tayra, Royal Buzzard.

Finally, 2016 will be marked by a beautiful pink book with the birth of many felines and birds of prey, as well as 5 Canada Wolves and 4 rare Wild Dogs which is exceptional !

The renovation of the Lions’ enclosure has been completed.

The territory of the “King of Animals” benefits from the latest techniques in zoology: a presentation at the same level as the visitors behind large glass windows weighing 350kg each, and nearly 100 tons of rocks are present.

With these installations, Le Domaine des Fauves offers a striking experience: to be a few centimetres away from one of the most dangerous predators on the planet.

The mini-farm “Graines de Fermiers”opens its doors and welcomes its animals (rabbits, sheep, guinea pigs, chickens) and its sensory games.

The Cheetah enclosure is ready and waiting for its new recruitss. Important event in the enrichment of the zoo’s predator collection. The spotted hyenas have successfully integrated their new enclosure.

Some parts of the park still need renovation, in line with our desire to modernise: while continuing the impetus given years ago, the aim of the zoo’s management is to achieve a global renovation objective in 5 years.

50 years later, the park welcomes more than 70,000 visitors per year and is changing in size… Its aim is still the same:to preserve and safeguard through knowledge!

Its positioning and communication axis is as follows: The Zoo as close as possible to predators!

The new season sees: a unique show “Predators of the Skies” with birds – stork, owl, kookaburra, raven and the inauguration of an unusual Lodge in the park and alongside… wolves!

The Domaine des Fauveswishes to offer a unique experience to the public, by encouraging a feeling of ever greater proximity to the predators: observe the lions up close, admire the carnivorous birds, eat in front of the jaguars, sleep with the wolves ….

These innovations are part of an even more participatory and interactive approach, to better ensure our role of education through entertainment.

As of 2019, the park now has two lodges facing the Macenzie wolves: the Yellowstone lodge and the Great Northlodge.

These Lodges are ideally positioned, an opportunity to immerse yourself in the daily life of these fascinating animals day and night. To be seen and heard! 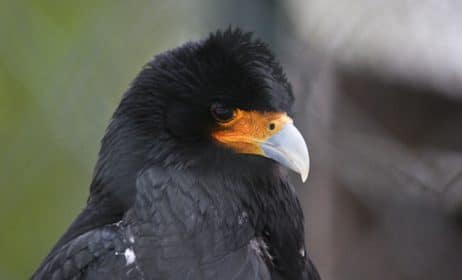 Take the time to observe!

An island with various birds: vultures, kites, caracaras, etc. A place of observation for our visitors and a place of study for us, park professionals, on the behaviour of these individuals whose objective is to reproduce in a protected environment and thus ensure the perpetuation of these species.

Our values: Taking the time to respect the animal world to maintain its existence.

To stop, observe, contemplate a way of life, behaviours in an adapted and authentic environment. Wood is the material used par excellence as the main element in the spirit of nature that reigns in our new structure but also a pond, perches and a place dedicated to breeding. Thinking about aviary means, above all, getting as close as possible to the standards of life of our birds.

And why not: BECOME birds!

Each park participates in conservation programmes in its own way and with its own resources.

There are two conservation programmes in Europe in which we participate: the EEP and the ESB

Their aim is to initiate, monitor and advise on the breeding of a threatened (or endangered) species while maintaining its natural characteristics, with a view to its eventual reintroduction into the wild or the reinforcement of the wild population through the addition of zoo bred specimens.
An EEP tracks all animals of a species present in European zoos, and to do this, a species coordinator is in charge of identifying all individuals and creating a register containing the family tree of each animal, as well as any additional information needed for the management and breeding of the species. The coordinator also carries out genetic and demographic analyses and makes breeding recommendations.

Recommendations are issued every year whereby some animals should breed and others should not, some individuals should be transferred from one zoo to another as breeding stock, etc. In order to avoid inbreeding problems, zoos exchange individuals, prevent the reproduction of certain animals that are too inbred, or improve the reproduction of a given population. Similarly, in order to preserve so-called pure lines, in anticipation of reintroduction into the wild, zoos sterilise animals that are not purebred.

Our species in EEP